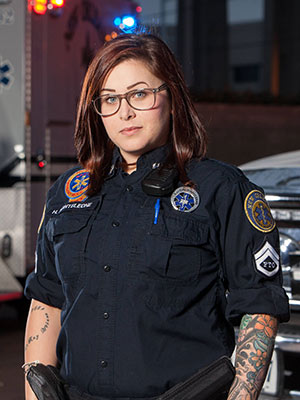 'You Can Never Unsee the Bad Things We See': An Interview with Holly Monteleone

The Nightwatch paramedic talks about the toughest and most fulfilling parts of the job, the craziest calls she's been on, and what she wants the public to know about those who work in emergency medical service.

When and how did you know you wanted to be a paramedic?

I initially wanted to be a lawyer. I never had a conscious thought of what a paramedic even was. But eight years ago I took the EMT course so a friend could get a bonus from the company she worked for. A week into working I was hooked and never looked back.

WATCH: Binge the first four seasons of Nightwatch now, no sign in required.

What's the toughest part of the job?

That's a hard one. Kids are a sore spot for just about everyone. [It's tough] being looked to during a crisis in which a child is critically injured or dead. Unfortunately, there are children who have been victims of gun violence in New Orleans. [When a] tiny human's been shot and thrown into your arms with someone begging you to fix them...that's a little life-altering.

What's your favorite part of the job?

My favorite part of the job is the skills and using the knowledge that I have. We use it all here. Everything you learned in paramedic school you will see here in New Orleans and you will use your skills. Some medics won't see certain things that we see here on a daily basis. That's what I wanted for my career and that's what I'm getting.

What do you find the most fulfilling about the job?

I gained a second family from this job. I help people every day. I feel needed and I have a sense of self-worth. How could that not be fulfilling?

What is the worst thing you've seen on the job?

I've seen death. Natural, unnatural, unexpected, self-inflicted, accidental, young and old. We see it all. The worst is the ones you never had a chance to save.

How do you handle not freaking out during scary or gruesome situations?

What's scary or gruesome to most isn't scary to me. Blood, guts, brains, bones, BRING IT! The human body is amazing and all these things intrigue me. Except vomit — that's just gross.

What do you like to do during your off time to "un-see" some of the really bad stuff you see on the job?

You can never unsee the bad things we see. You can only shift the attention. I put my focus on my family and my work family. Playing with my son shifts any bad focus and all I see is him. All those bad images get pushed away.

What's the craziest thing you've seen while out on the job?

Craziest thing I've ever seen   it's New Orleans! I'd say when people insert objects — like a can of Vienna sausages for instance — into places they don't belong. Then that item gets stuck and that person blames the incident on a game of truth or dare, even though they are alone. And now they have to call us and take that trip to the ER. That's just crazy.

Are there certain times of the year when you guys just know that you're going to get swamped with calls?

The summer is always action packed with a lot of various types of trauma. During the winter we say 'Tis the season for the wheezin'.' You get a lot of respiratory emergencies in the winter. And then there's Mardi Gras, when we have tens of thousands of visitors. It's like a three week long MCI (Mass casualty incident) with plenty of patients to go around.

What's the nicest compliment you've ever received from someone you've helped?

Sadly nothing stands out. This is a thankless job. People forget about the medics who brought them into the hospital — they only remember the nurses and doctors. So we give each other kudos and thanks.

How important is a good rapport with your partner while on the job?

You have to have a good rapport with your partner because that's all you have for 12 hours. And this isn't a one man job. You need your partner and they need you; no one can do this job alone.

What do you think is the most important quality to have as a paramedic or EMT?

Confidence in yourself. You have to walk away in the morning knowing that you did your absolute best. Take things home and doubt yourself and you won't last very long.

Are there a lot of female paramedics and EMTs in New Orleans?

There plenty of females in EMS. We're just all hardcore. You gotta be in order to last. So when you see one on a call, just realize that she's probably a bad ass.

What do you hope people get out of the show?

I want people to realize that we exist. We are human beings. We give you 12-hour shifts, our holidays, our kids' birthdays, and our anniversaries. People don't stop dying just because it's Christmas. And people think we are just ambulance drivers. We are an essential part in the health care system that no one thinks about, or everyone forgets. We treat people and in some cases we are the defining factor between life and death. We exist and we'd like you to know us.

By submitting your information, you agree to receive emails from A&E and A+E Networks. You can opt out at any time. You must be 16 years or older and a resident of the United States. More details:
Follow #Nightwatch