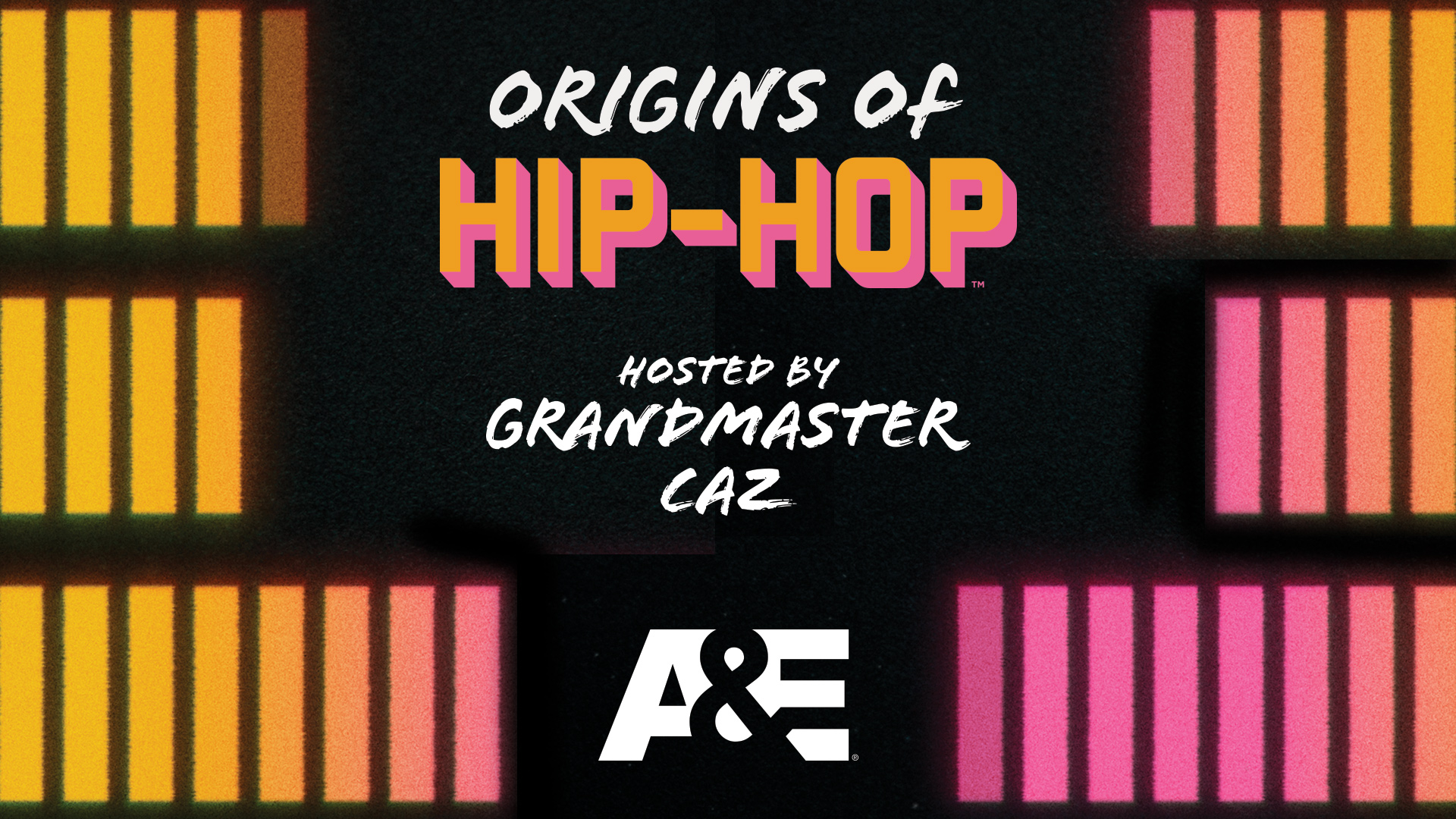 Origins of Hip-Hop: The Podcast

Hosted by renowned emcee and founding father of hip-hop Grandmaster Caz, A&E's Origins of Hip-Hop: The Podcast reveals the true stories of the people and places that ignited a global culture. Each episode, Caz sits down with hip-hop legends like Busy Bee, Grand Wizzard Theodore and Sha Rock to hear how it all happened straight from the source. From the legendary OJ Car Service bumping the first "mixtapes," to hip-hop as therapy for the people of The Bronx, Caz and his guests uncover the lesser-told stories that made hip-hop what it is today. These are their stories and the stories to be told for generations.

The four elements of hip-hop, the DJ, the breaker, the MC, and the graffiti writer, are not only pillars of the culture but crucial components of the original hip-hop crew. In this exciting season finale, legendary MCs and rap crew pioneers Grandmaster Melle Mel, Lonzo Williams, Sha Rock, and breakers of the full circle Souljah's Rokafella and Kwikstep rejoin the podcast crew. These hip-hop legends tell their crew’s origin stories, pitfalls, and triumphs. Hear how the hip-hop crew changed the game and how it evolved throughout time. So, grab your ride-or-dies because you’re gonna need an entourage for this episode.

S1E9: Roots of the Rhyme

Hip-hop was not born in a day. In fact, its influences go way back to the first spoken word poets and original storytellers of the times. In this episode, The Godfather of West Coast hip-hop Lonzo Williams and journalist Davey D return to discuss The Watts Prophets, The Last Poets, and influences of street culture on the birth of hip-hop. Plus, former radio DJ turned station owner Greg Mack talks about the gangs and pimp culture that shaped what is hip-hop then and now. So, get a pen and pad because we’re tracing hip-hop’s lineage in this episode.

As hip-hop began to spread its wings in the 70s and 80s, breaking into mainstream media was the logical next step. Getting a record deal and radio play was the goal for many emerging artists, but they soon found that the industry was not all it was cracked up to be. Legendary hip-hop pioneer Melle Mel joins Caz to talk about “The Message” and the peaks and pitfalls of the music industry. Plus, Sha Rock returns to tell her story about being in one of the first groups to get a record deal and the struggles that came with it. So keep your ears open because we’re delivering cautionary tales and triumphs in this episode.

The gold chain has been a statement piece in music for decades, from the disco era to the days of funk and soul. When artists like Run DMC and Kurtis Blow started flaunting chains on their album covers, it symbolized a certain status and bravado that shifted fashion forever. In this episode, Caz sits down with the godfather of West Coast hip-hop Lonzo Williams and jeweler Avi Malidani with returning guest Dr. Ebony Utley to talk about the importance and evolution of the chain in hip-hop fashion. Plus, breakers Rokafella and Kwikstep tell Caz about their firsthand experience seeing fashion’s impact on the culture, from the function of a zip-up hoodie on the street side cardboard to the flash and style of Adidas tracksuits in a b-boy pose. Rock your flyest outfit because we’re stuntin’ for the culture in this episode.

S1E6: Coast to Coast And Around The World

Hip-Hop began in the Bronx but quickly spread across the country and the world. In this episode, Davey D and Jeff Chang are back to talk about the spread of hip-hop from the east coast to the west coast, and all the places in between. Plus, Busy Bee rejoins Caz to recount their journey from the Bronx to Japan and how they brought the foundations of hip-hop around the world. Grab your ticket because hip-hop is going global on this track.

Just as Motown influenced the Civil Rights Movement, hip-hop has been a tool for resistance against the ruling class in The Bronx and worldwide. In this episode, Dr. Ebony Utley and Author Jeff Chang return to talk about how hip-hop and social justice coincide in our communities and the strides they have yet to make. From Black Power to Black Lives Matter, they break down how hip-hop can create economic equality and be an agent for change, while Caz and MC Sha Rock tell us how hip-hop pushed against the status quo with something so organic as a party.

Mind-altering substances have always had an influence on popular culture and music, but for hip-hop it wasn’t just in the music. In the late ‘70s and ‘80s drugs were in communities and homes all around the city. As the epidemic tore through the Bronx, hip-hop was an escape and way for people to tell their stories. In this episode Caz invites scholar and author Jeff Cheng to talk about the role drugs have played in hip-hop music and culture in the Bronx, walking us through the evolution of substance use and hip-hop through time. Legendary MC Busy Bee and Sha Rock return to talk about their personal experiences and how they rose above and beyond the strife with hip-hop at their side.

Hip-hop has been called many things: a culture, a religion, and a way of life. For the people of the Bronx in the ‘70s, hip-hop was a place to belong and a place of refuge from the chaos. In this episode, Caz talks with experts Dr. Jaleel K. Abdul-Adil and Dr. Ebony Utley about the ways hip-hop transforms, heals, and expands on conventional forms of self-care. He also sits down with artists Busy Bee and Grand Wizzard Theodore to share what hip-hop meant to them when the going got tough. Community organizer and educator Melissa Libran also joins to explore how hip-hop educates and builds positive futures for the next generation. Tune in and bring a notebook because you’ll want to write all of this down.

In the fundamentals of hip-hop, the DJ is number one. From the first party DJ Kool Herc played in the Bronx to the innovative two-turntable genius of Grandmaster Flash, the DJ is the foundation of hip-hop music and culture. In this episode, Caz sits down with the inventor of scratching Grand Wizzard Theodore and turntable champion DJ Shortkut to explore the mastery of turntablism. From building a sound system to mastering a technique, the DJ has evolved into a full-on art form. Grab your headphones and a new set of needles because you won’t want this record to skip.

In this very first episode of Origins of Hip-Hop: The Podcast, host Grandmaster Caz sits down with legendary MC Sha Rock and renowned journalist Dave D to talk about the influential OJ car service. Back in the late 1970's, before the terms "hip-hop" and "mixtape" even existed, the OJ Car service gave young MCs an opportunity to spread their music throughout the borough of the Bronx. Riding with the windows down and music up the OJ Car Service promoted the new wave of music that would become hip-hop today. Hear true stories firsthand and learn the real impact of a car service that made history. Make sure you got your fare money cause you don’t want to miss this ride.

Check out a preview of the new podcast premiering Wednesday, May 18.

Apple Spotify Acast
The Apple logo, iPhone, iPod touch, and iTunes are trademarks of Apple Inc., registered in the U.S. and other countries..
By submitting your information, you agree to receive emails from A&E and A+E Networks. You can opt out at any time. You must be 16 years or older and a resident of the United States. More details:
Follow #OriginsOfHipHop