In each episode of "America's Top Dog," airing Wednesdays at 9 pm, four teams of top K9 police dogs and one civilian "underdog"—along with their handlers—compete through a massive, three-round obstacle course that challenges their unique set of skills. From chasing down suspects and delivering a takedown bite, to tracking down scents and leaping over walls, the competitors must draw on every aspect of their training and the strong bond and trust between dog and handler.

When constructing an obstacle course for these talented teams, the show creators worked with the LAPD and top experts to make sure that the course was safe and fun for dogs and their handlers, but still offered an intense challenge for these talented teams. (And, of course, a veterinary team was on set throughout filming.) Trainer Nick White offers his expert opinion on the top five most difficult parts of the course, and explains what skills each section puts to the test. 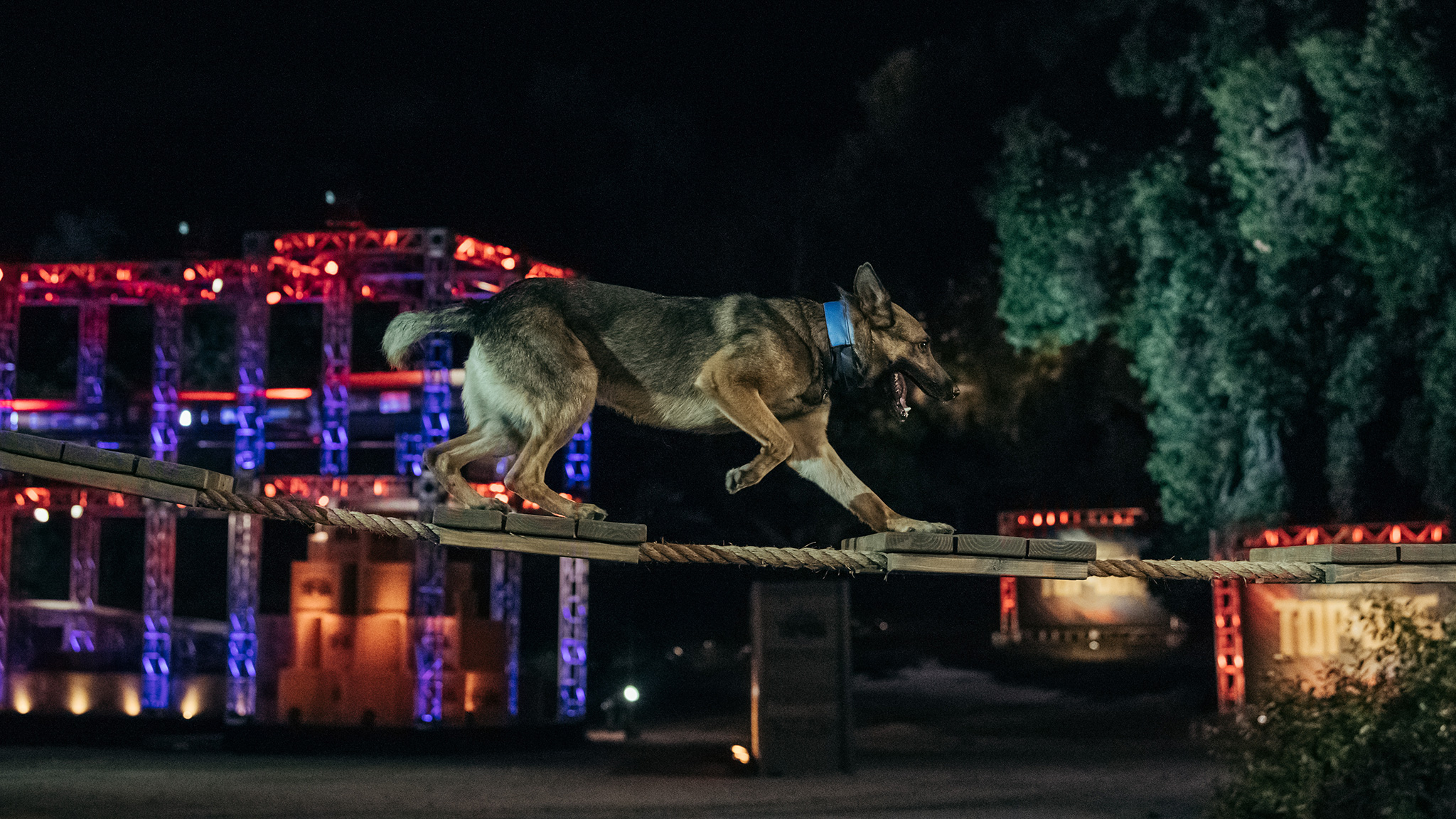 The first obstacle course the competitors face has been dubbed the K9-Combine, and it's composed of five separate challenges. The fourth of those challenges is the Rope Bridge, where dog and trainer must run up a ramp, and the dog must cross wobbly planks suspended by ropes and separated by large gaps to get to the opposite side—an obstacle designed to test the dogs' confidence on unstable surfaces.

Nick says the bridge threw some competitors off because "It was just when they would take that first step and it would start shaking a little bit, they would bail off or jump off." The unfamiliar surface seemed to take some of the dogs by surprise. 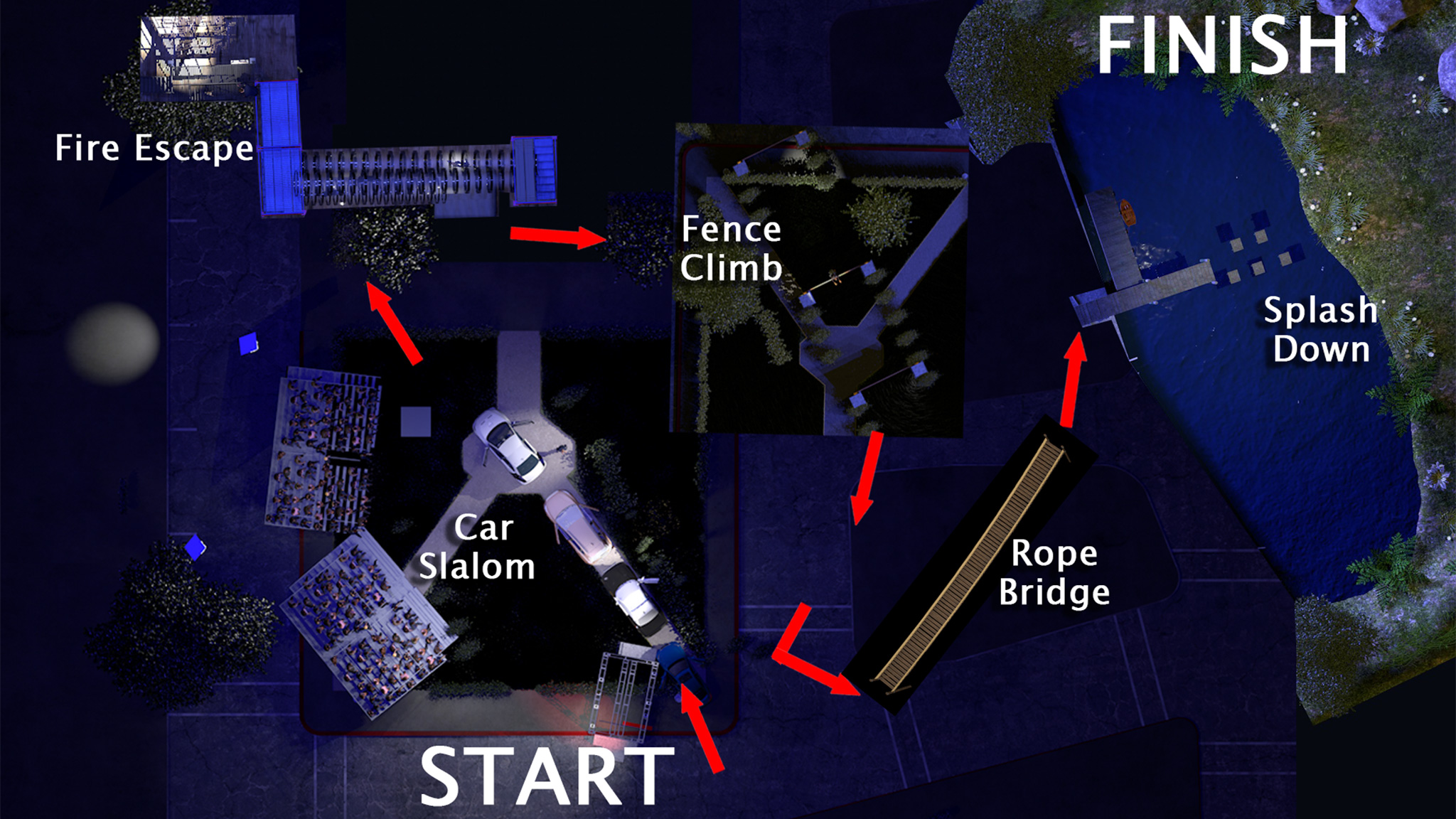 A diagram of the K9-Combine in all its glory.

In order to conquer this obstacle, the handlers rely on incentivizing their teammates. "What I really liked is the handler said, 'Okay, he's afraid to do this, but I know that his love of his reward outweighs this fear of this,'" says Nick. "And they use that to help motivate them across. It's kind of like a kid—if you're afraid to do something and your parents say, 'Hey, if you do it, I'll buy you ice cream.' You're like, 'Oh, okay, I'll try it.'" 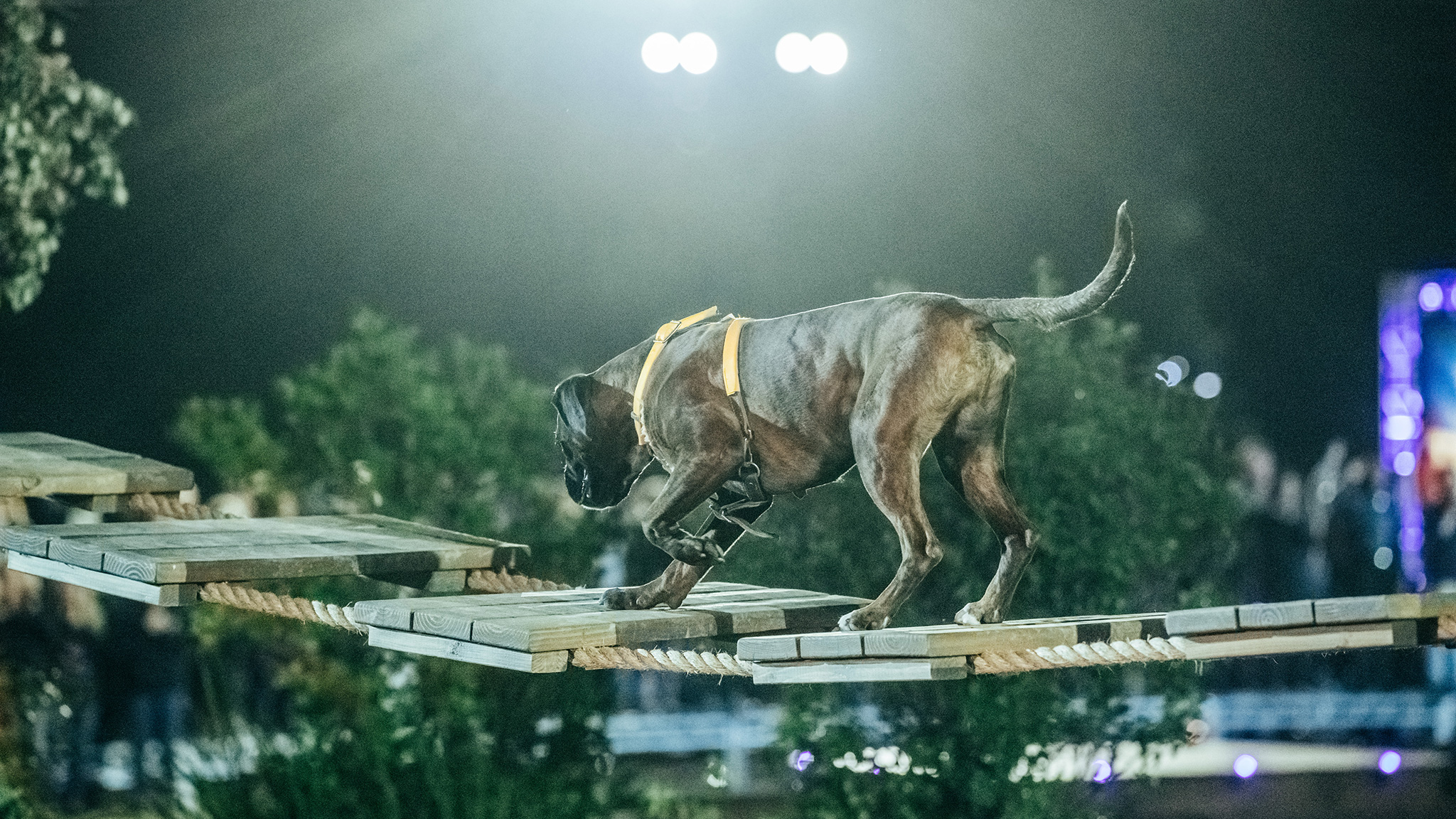 Careful paw placement is vital on the Rope Bridge.

In their day-to-day life, these teams are no strangers to unsteady ground. "You never know what you're going to encounter when your dog's chasing a suspect on a street or chasing a suspect through a house," Nick explains. "There could be a lot of trash and unstable surfaces and the dogs have to jump up on things that may wobble a little bit." 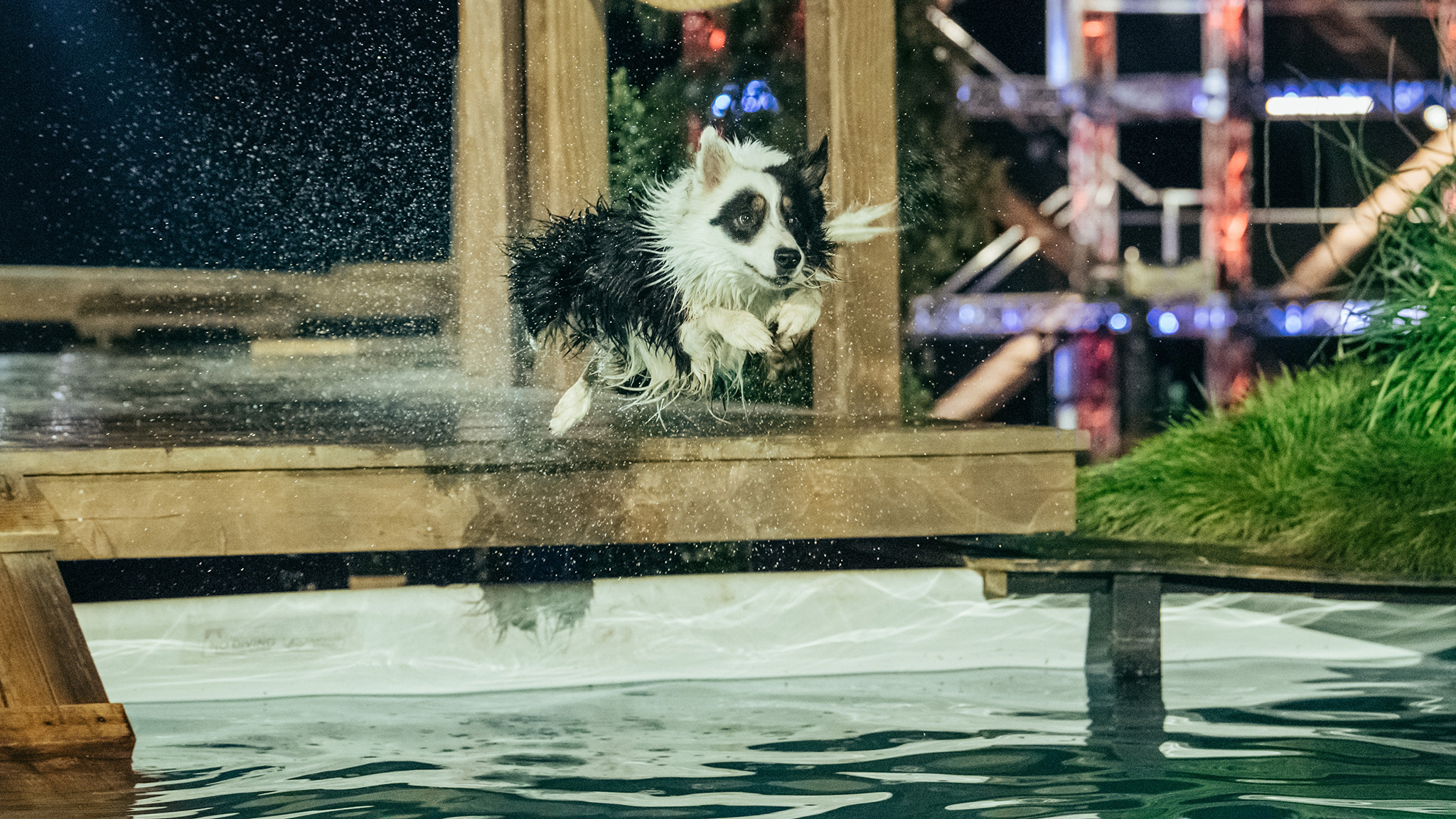 This furry participant takes a flying leap into the Splashdown.

After conquering the Rope Bridge, the dogs are immediately faced with their final challenge on the K9-Combine: The Splashdown, a 46-foot pool separating the dogs from the finish line. The dogs need to take a flying leap into the pool, swim to the other side, and climb out on a ramp. However, not all of the competitors are interested in getting wet. Some come to a screeching halt before taking the plunge, while others dive right in. The difference, Nick says, is experience.

"A lot of these dogs just aren't exposed to water," Nick explains. "Maybe you're in Fargo, North Dakota, and you really don't have any water in your city or in your patrol area. So it doesn't make sense to spend a lot of training hours and time doing water drills and water intrusion training when it's just not realistic for your job. It's kind of like, I'm a dog trainer, so I'm not spending 20 hours a week researching dolphin training." 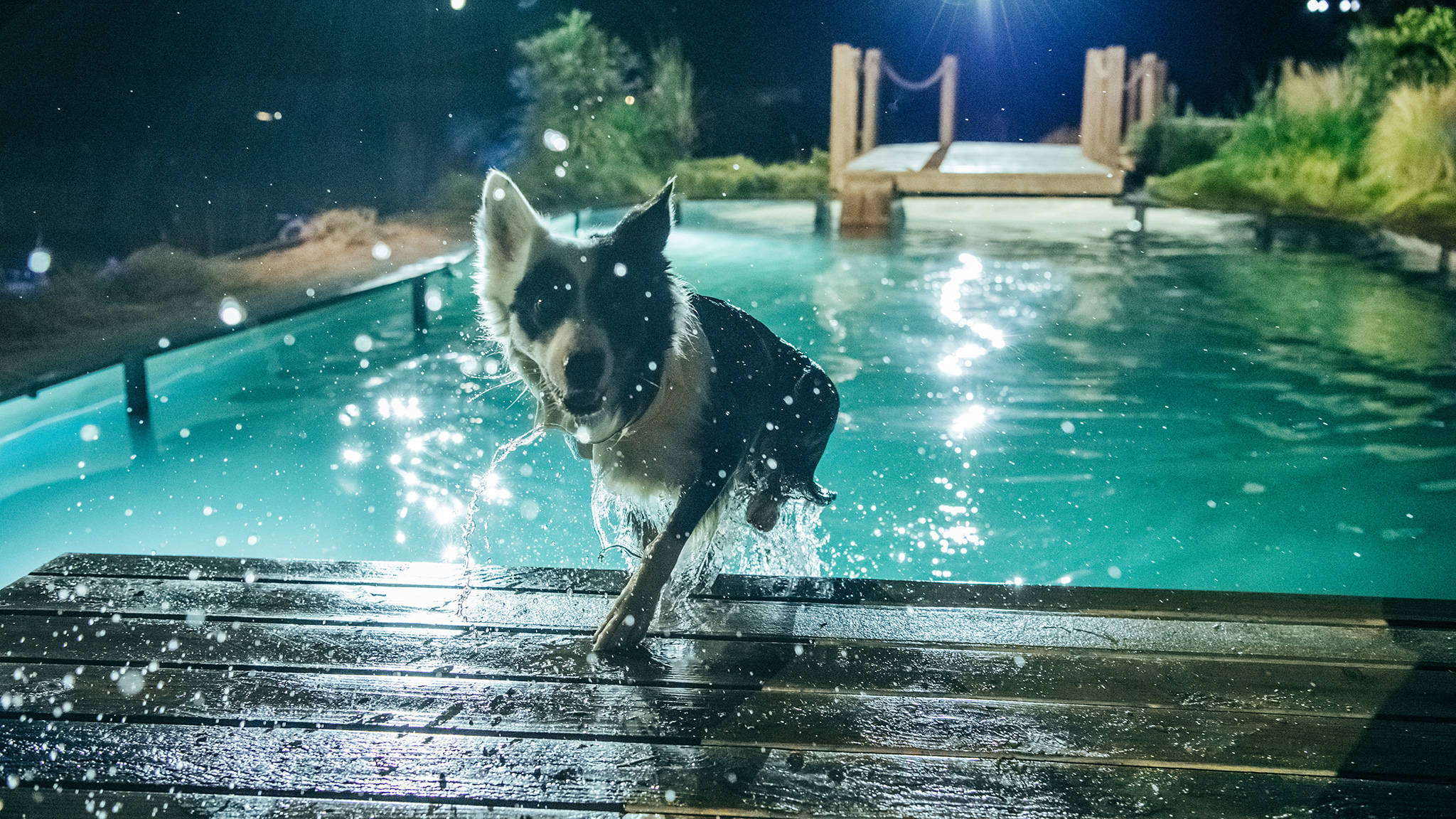 A successful exit from the Splashdown is needed to pass the challenge.

For dogs that do work in cities near bodies of water, and especially for the K9 component of the Navy SEALs and the U.S. Marine Special Forces, running drills in water is a way of life. Nick says that Water Intrusion Training includes things like "the dogs jumping into the water to do a bite. The dogs chasing suspects in the water and apprehending them. Or the opposite—the teams are coming from the ocean and they see a suspect on the beach take off running and so they drop the dog out, he swims in, gets to the beach, takes off running and pursues them before the teams even land on the beach themselves." 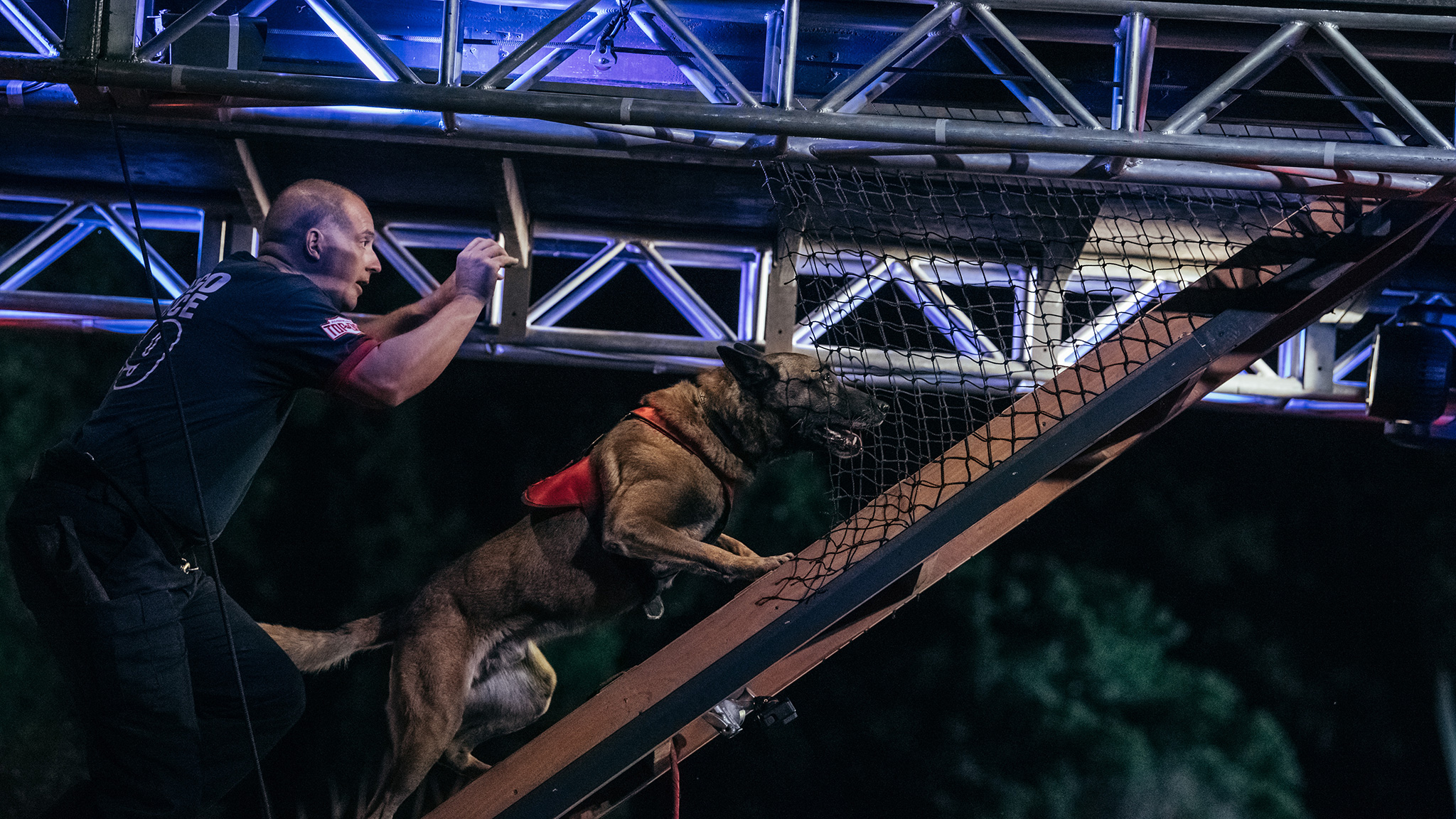 A K9 team navigates the challenging Fire Escape. "America's Top Dog" worked with some of the top K9 units in the country as well as certified training organizations during the casting process.

Number 3 on the list is all about communication. Running up the Fire Escape—a four-story tower requiring pull-down ladders to access each floor—is a challenge in itself, but the real trick to conquering this obstacle is getting your canine companion to not just grab the dangling ball that is connected to the ladder leading to the next level of the fire escape—it's communicating that the ball needs to be pulled down in order to get the stairs to drop. 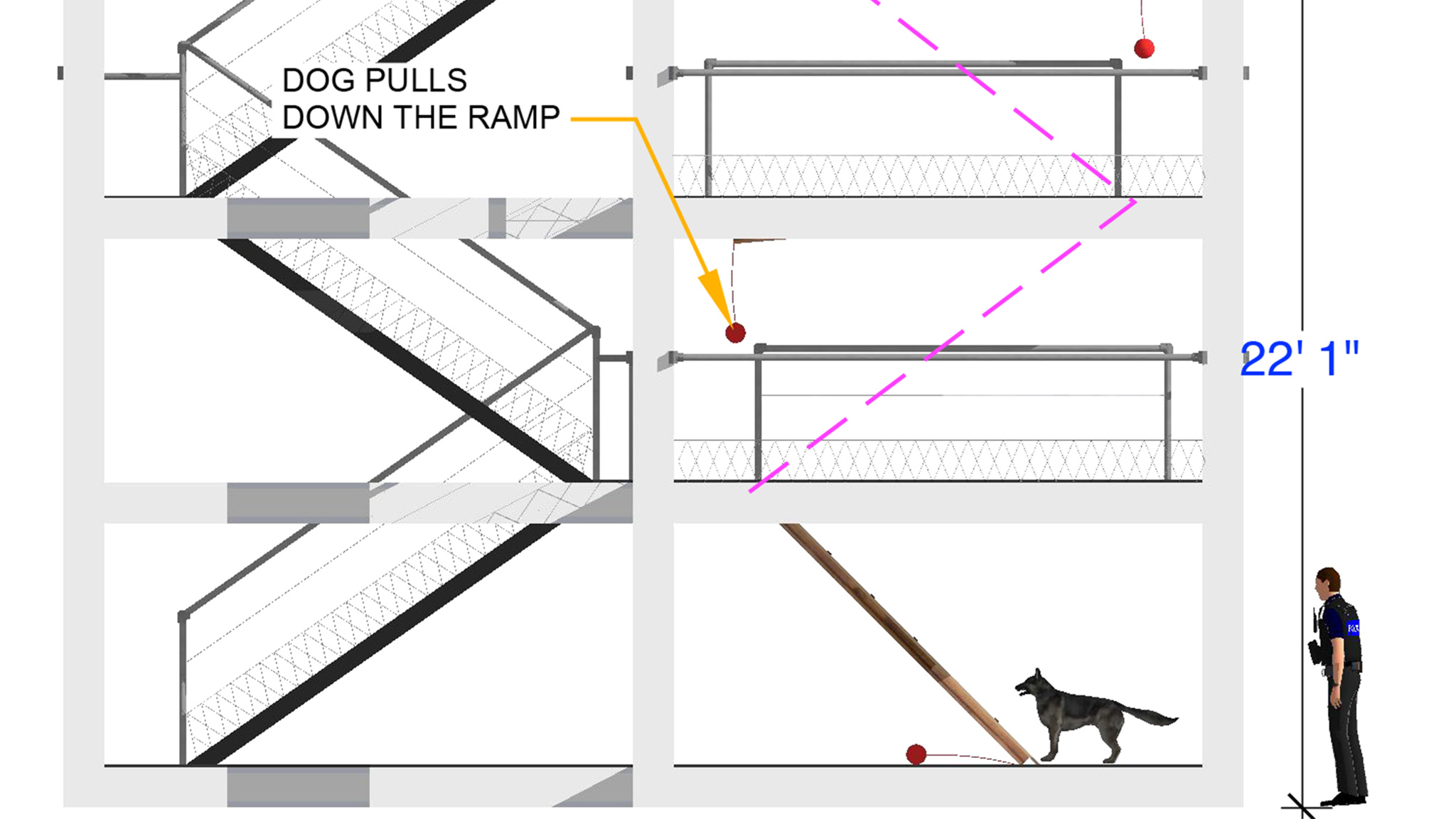 A diagram of the Fire Escape obstacle.

"The dogs did not have an issue grabbing the balls themselves because they're ball-driven dogs," Nick says. "However, it was kind of up to the handler to really communicate with the dog, 'Hey, you need to pull on it.' Once the dog understood that on the first level, it was generally pretty easy for them on level two and three."

These competitors don't face a lot of rubber balls hanging from ropes in their day-to-day work, but communication is always key to their success as a team. And the physical challenge of climbing the fire escape is something they deal with daily. "The ball grab-and-pull obviously itself really doesn't directly relate, but the fire escape in itself does. The dogs are going in apartment buildings, commercial buildings and industrial warehouses doing sweeps of complexes looking for suspects. So, obviously they're running up and down a lot of steps and navigating their way through obstacles as they go." 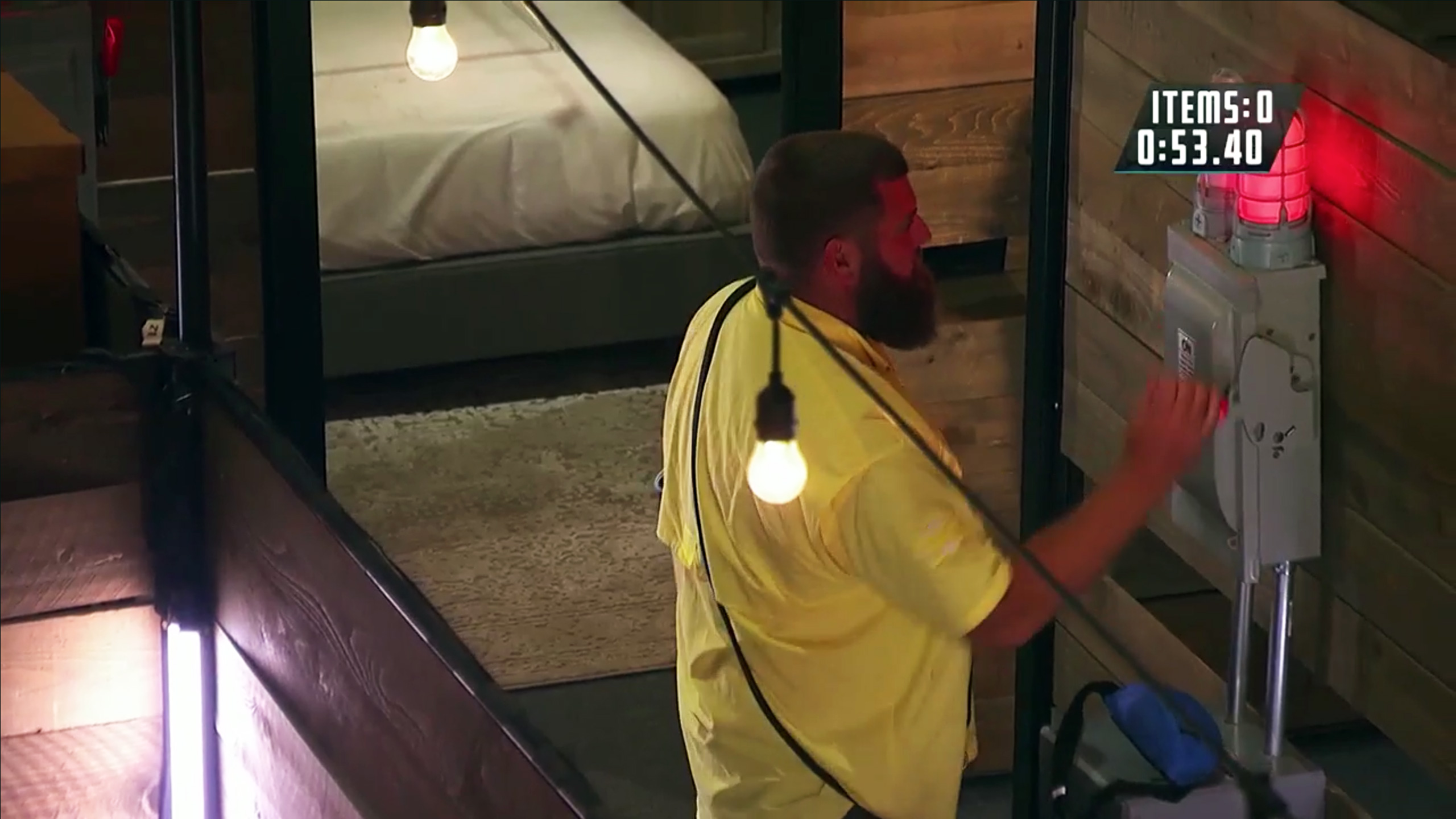 Handlers must keep their cool even as the countdown clock counts on.

One of the most challenging aspects of "America's Top Dog" isn't an obstacle, Nick says, but the race against the clock. As the timer ticks down, handlers find themselves fighting their own nerves and rushing to complete challenges, sacrificing accuracy for speed. That's when things can get messy.

"The dog isn't like, 'Oh my God, I'm going to be on national television.' They don't know any of that," Nick explains. "They just know, 'I'm going to jump this wall and I'm going to go in here and sniff.' But the handler knows all those things. And that's when mistakes are made."

Teams must keep calm and work together, despite the many distractions they face.

Between the clock ticking down, the distracting lights and cameras, and the knowledge that they're going to be on national television, the competitors face an array of variables that, when added up, can quickly become overwhelming. "Like we say in law enforcement," Nick says, "the totality of the circumstances adds a big impact."

Still, being ready for anything is part of the job, and the teams have plenty of practice keeping their composure. "In their real job there's going to be a lot of stress, and a lot going on at times," says Nick. "How are they going to perform under stressors and pressure that they didn't expect? Just like in real life, they don't know what the next call is going to be." 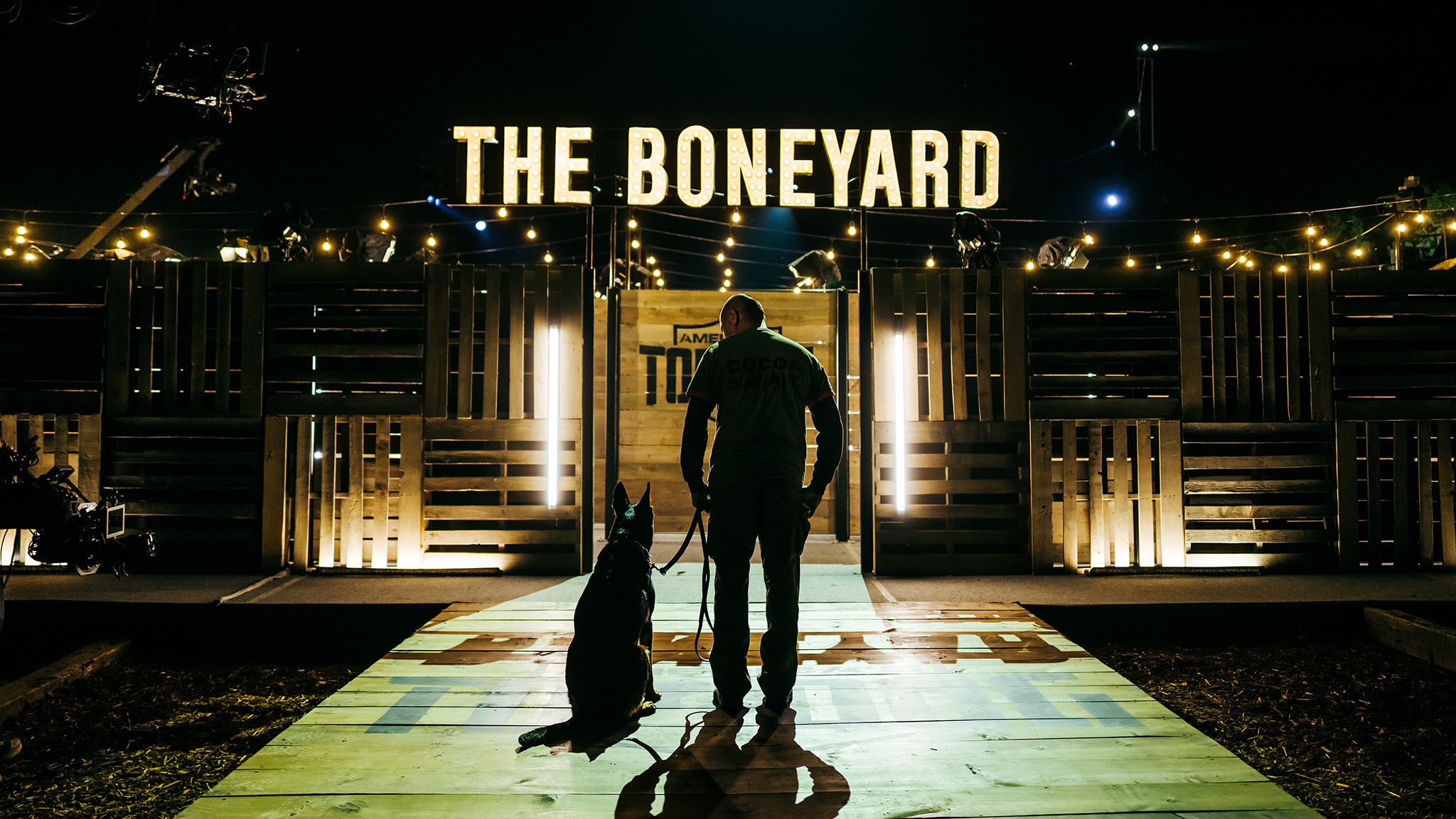 Competitors face the imposing entrance to the ultimate scenting challenge: The Boneyard.

After completing the K9-Combine, the dogs are faced with the ultimate challenge of their scenting ability: the Boneyard. Here, the teams have just five minutes to search a maze of rooms and correctly identify five secret, scented items. The handlers have no idea what items they're looking for, only a canine’s incredible sense of smell can find them. It seems straightforward enough. So what makes it such a challenge?

"First, it's a 3,000 square foot maze," Nick says. That's a whole lot of space to hide a mere five objects. And when the scented objects can be as small as a toothbrush holder or a baseball mitt, the difficulty level increases. But the dog actually finding the object is only part of the challenge. The handler also has to be on their game in order to notice their canine alerting them to the object. 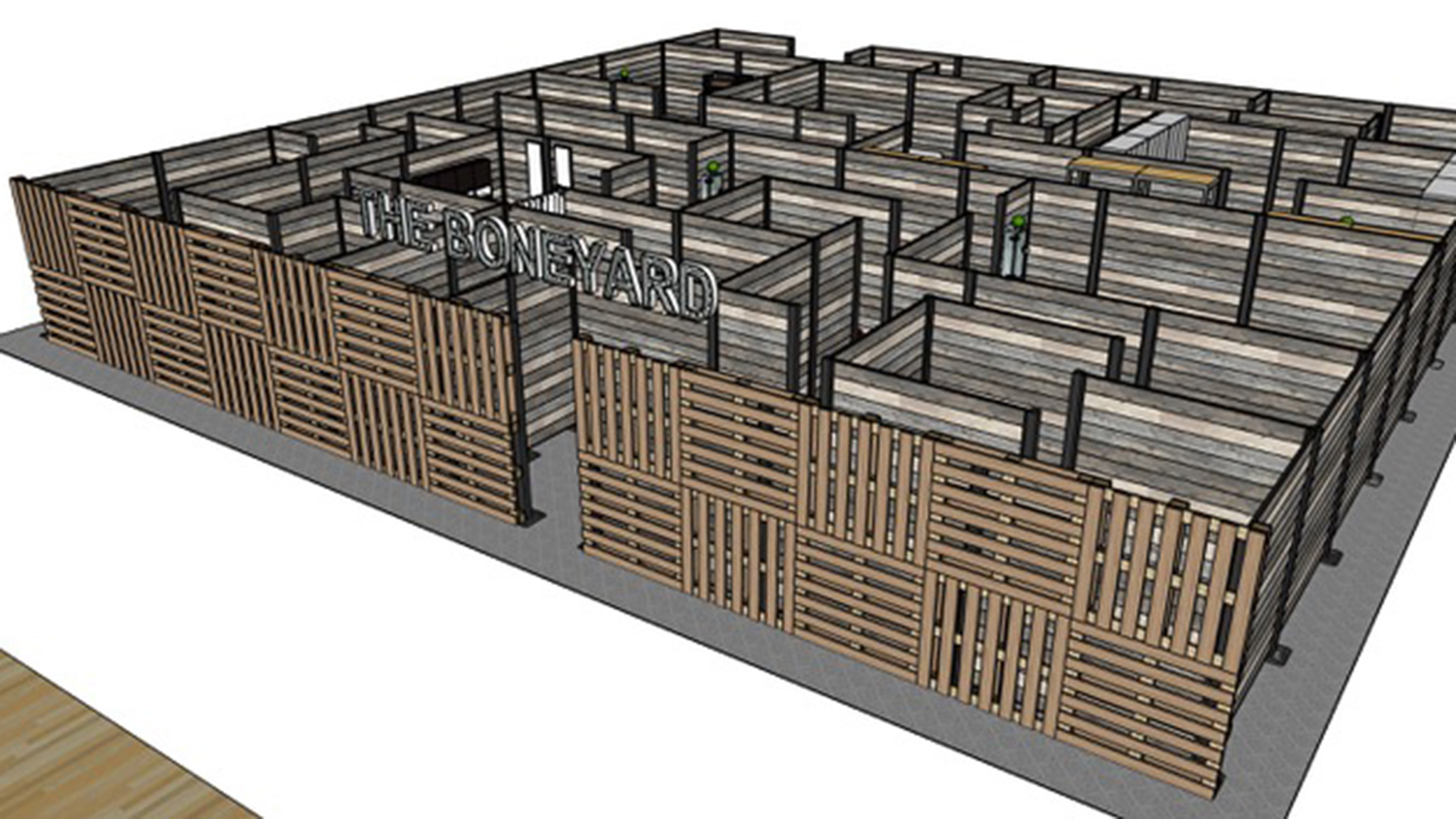 A diagram shows how labyrinthine the Boneyard truly is.

Nick says, "The handlers would be frantically searching and rushing and sometimes they would have their head turned, looking around the room, and I would see the dog throw a change of behavior. Like, 'Hey there's something right here.' But the handler would miss it because they're so frantically going through the rooms."

With so much space to cover, the teams have to move quickly, but that speed can come at a cost. "They're rushing through it," Nick explains, "and, in turn, they're rushing their dog through rooms that, if they had have taken their time and done a more methodical search like they would have on the street, the dogs would have alerted." 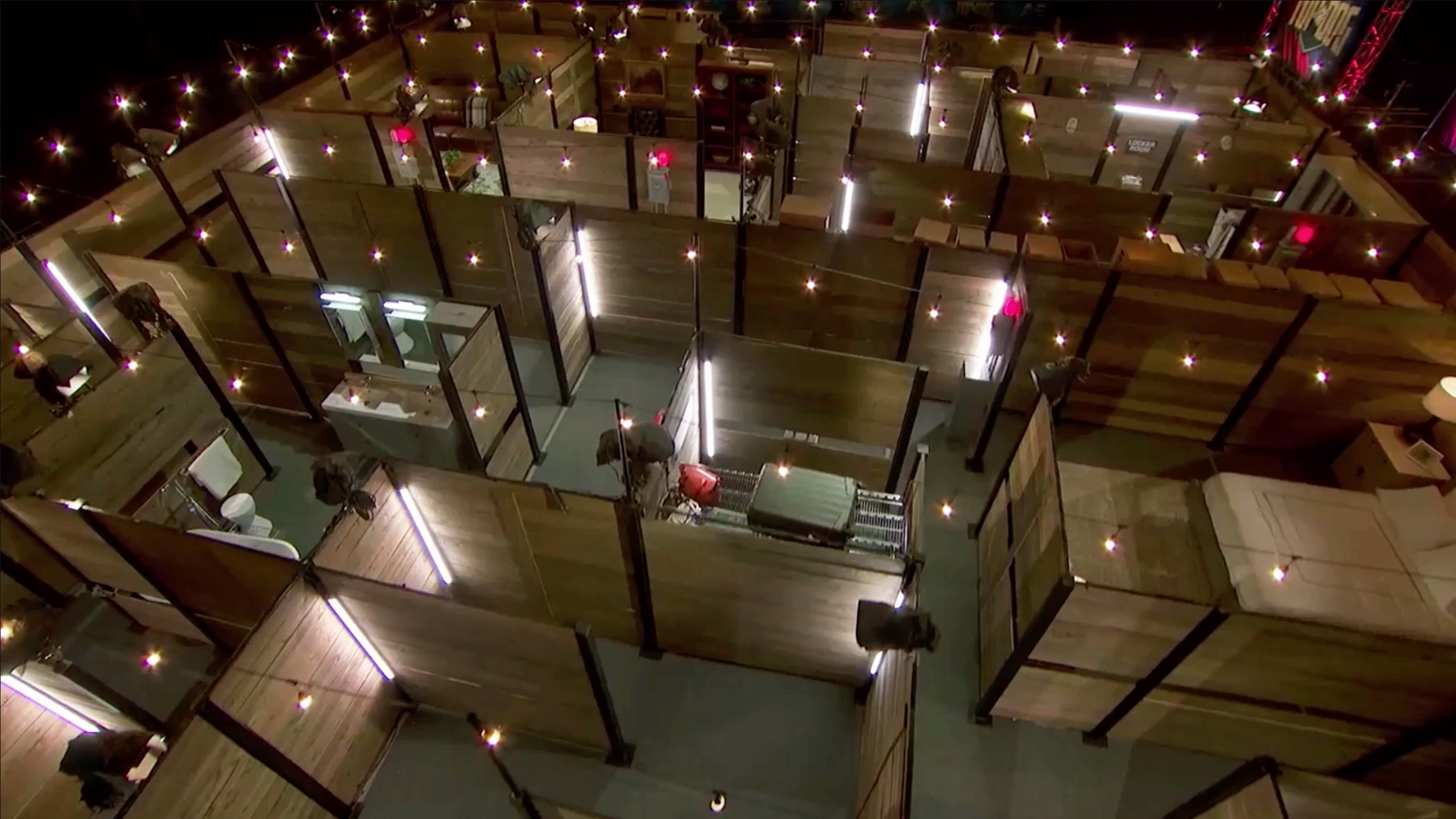 Only five secret, scented items have been hidden in this enormous space.

The Boneyard was designed to be the world's toughest scent detection test. It needs to be difficult because the canines competing on America's Top Dog are so incredibly skilled with using their noses. As Nick says, "For a lot of these dogs the Boneyard is, for a lack of a better word, the dogs' full time job, which is finding and alerting on odor." Dogs that work in narcotics are on patrol, sniffing for illegal substances, every day. And explosives dogs are becoming a more common sight. Nick offers an example: "If a president is coming into town or something, a lot of these departments are assisting the U.S. Secret Service to sweep stadiums for explosives or sweep hotels for explosives, which is kind of where the Boneyard really comes into play for them,” he explains. “It's what they're used to doing, which is searching rooms with a wide variety of things. They can be in a hotel and searching hotel rooms with beds and offices and desk chairs, or searching locker rooms at stadiums."

By submitting your information, you agree to receive emails from A&E and A+E Networks. You can opt out at any time. More details:
Follow #TopDogAE