Jack the Ripper and 7 Other Killers Who Left Notes

Killers who leave notes at crime scenes or mail missives to police and the press take a big risk—that they will accidentally give themselves away. With new advances in DNA and forensics, a murderer who licks a stamp or even holds a piece of paper might leave incriminating evidence.

Watch: Naomi Ekperigin talks about the Zodiac killer and the many theories surrounding his real identity.

So why do it? Is it the thrill of playing cat-and-mouse with those trying to expose him? Some experts think a note-writing killer subconsciously wants to be caught. Here are the stories of 8 murderers who just had to put it in writing. 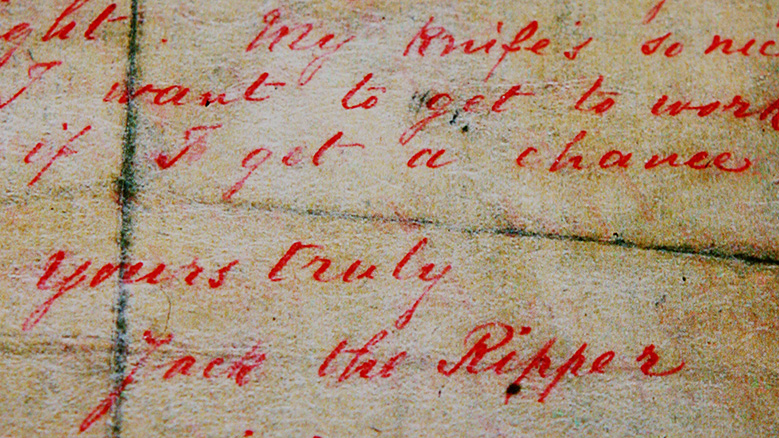 A letter allegedly written by Jack the Ripper and sent to a London news agency on September 25, 1888 is displayed at a press preview of the ‘Jack the Ripper and the East End’ exhibition at Museum in Docklands, in London, on May 14, 2008. (Image: CARL DE SOUZA/AFP/Getty Images)

Jack the Ripper, who remains unidentified to this day, roamed London killing five women, some of them prostitutes. Of the hundreds of letters sent in his name to police and the press in Victorian London, the three sent in September and October 1888 to the Central News Agency are considered most likely to be real. The most famous is the “From hell” letter, which was accompanied by a piece of human kidney supposedly from one of the mutilated victims. On the paper’s upper right corner, it read, “From hell.” He wrote: “I shant quit ripping [whores] till I do get buckled [sic]. Grand work the last job was. I gave the lady no time to squeal. How can they catch me now. I love my work and want to start again.” The writer claimed to have “fried up” and eaten the other half of the kidney—and to have saved some blood to use as ink. The only problem: It had dried up.

In a postcard sent to “dear old Boss” at the Central News Agency, the killer called himself “Saucy Jacky,” and thanked the recipient for not publishing the letter earlier than asked. A few weeks later, a third letter went to George Lusk, president of the Whitechapel Vigilance Committee, which had been formed to patrol streets in the neighborhood where the murders had taken place. In another, the killer wrote, “Sorry about the blood still messy from the last one. What a pretty necklace I gave her.” He was referring to his victim’s throat.

1934
Albert Hamilton Fish
a.k.a. The Gray Man, The Moon Maniac, The Brooklyn Vampire
Fish confessed to three murders and was convicted (and later executed) for one of them—the 1928 strangling of 10-year-old Grace Budd. In 1934, Grace’s mother received a rambling and misspelled letter. The writer said he had become fascinated by tales of cannibalism and, on meeting Grace, had resolved to kill her: “I called on you…we had lunch. Grace sat in my lap and kissed me. I made up my mind to eat her.” Police traced the letter back to Fish (who had used a fake name when meeting the Budds) through a stationery logo. Authorities believed he might have also been the so-called Brooklyn Vampire, a murderer/rapist of children. When the police asked why he wrote to his victim’s family, he reportedly said, “I just had a mania for writing.”

1946
William Heirens
The Lipstick Killer
“For heavens sake catch me before I kill more I cannot control myself.” Those were the words scrawled in lipstick on the wall of divorcée Frances Brown’s Chicago home. She was found with a knife lodged in her neck and a bullet wound to the head. Later, six-year-old Suzanne Degnan disappeared from her home; the killer left behind a ransom note. The little girl’s body was found chopped up in sewer pipes all over town. Heirens confessed to the two horrific murders (plus another) and spent the rest of his life in jail; he later recanted his confession. 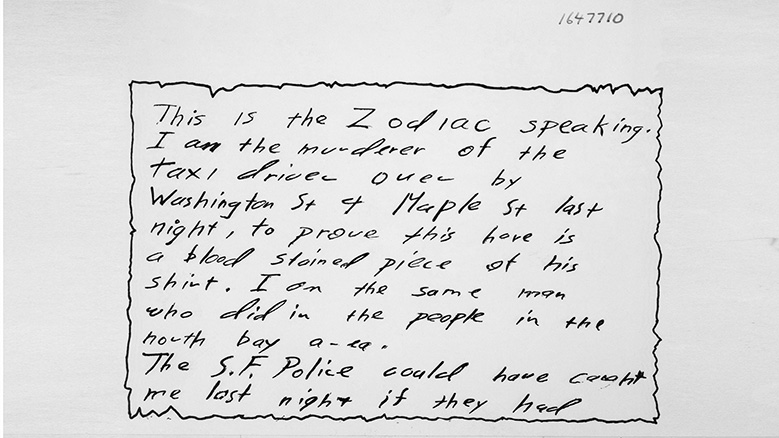 This letter and a blood-soaked piece of shirt alerted San Francisco police to the possibility that the slayer of cab driver Paul Stine might be the same man who killed four others in the Bay Area in the previous year. (Image: Getty Images)

Between 1966 and 1974 the Zodiac killer sent more than 20 written communications to police and the media. In one, he wrote, “This is the Zodiac speaking,” which led to his nickname. To an editor at the San Francisco Examiner, he claimed to be collecting souls to be his “slaves in the afterlife.” Also included: a warning that if the letter wasn’t published on the paper’s front page, the killer would go on another spree. The Zodiac—who was known to have killed five people in Northern California and who claimed to have killed 37—was also known for his puzzling cryptograms and ciphers, some still unsolved. In 1974, he sent his last letter. In 2002, the San Francisco PD was able to extract DNA from saliva on the stamp. It wasn’t enough to identify the killer, but it did rule out some suspects.

1969
The Manson Family
The Los Angeles murders of pregnant actress Sharon Tate and four others, along with the subsequent killing of supermarket executive Leno LaBianca and his wife Rosemary, shocked the nation. The killers wrote the words “pig” and “helter skelter” in blood on the door and walls of the two homes. In 1970, cult leader Charles Manson and three of his followers (Susan Atkins, Patricia Krenwinkle, and Leslie Van Houten) went on trial for the murders. Another “family member,” Charles “Tex” Watson, was tried separately. Prosecutors claimed the words were written to make people think the Black Panthers were behind the crimes, thereby triggering the race war Manson thought was inevitable. 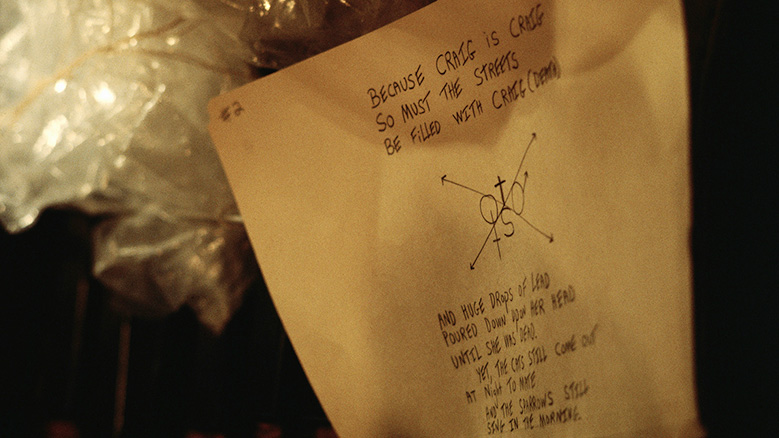 This note was found by police in the 1970 Ford Galaxy owned by David Berkowitz when they arrested him late August 10 as he sat in the car in front of his Yonkers, New York home. It is written in the style of the .44 Caliber Killer. (Image: Getty Images)

The Westchester County, N.Y., man and his .44-caliber pistol left a trail of bodies (six dead, seven wounded) in his wake. He also left notes by some of the bodies, including one in which he wrote: “I am a monster. I am the ‘Son of Sam.’ ” He also wrote to noted New York journalist Jimmy Breslin: “Hello from the gutters of N.Y.C. which are filled with dog manure, vomit, stale wine, urine, and blood. Hello from the cracks in the sidewalks…” In a note to police, he wrote, “Upon my capture, I promise to buy all the guys working on the case a new pair of shoes if I can get up the money.” He was caught when his car was ticketed at one of the crime scenes.

1990s
Keith Jesperson
Happy Face Killer
The Canadian-born trucker earned his nickname for the smiley faces he drew on letters to the police and prosecutors. His first known victim was a woman he met in a bar and then beat and strangled. He also killed unidentified women along his trucking routes. After his first known killing, he wrote a confession on a bathroom wall at a bus station and signed it with a happy face. “I beat her to death, raped her and loved it. I’m sick but I enjoy myself too.” He also wrote to the media and to the police—signing all the letters with the same scribbled face. In a letter to the Portland Oregonian, he wrote, “God will be my judge when I die…It all started when I wondered what it would be like to kill someone. And I found out. What a nightmare this has been.” The letter reportedly closed with a creepy warning: “Look over your shoulder. I’m closer than you think.” In 1995, Jesperson strangled his live-in girlfriend, which led to his being caught. He is serving a life sentence in an Oregon prison. 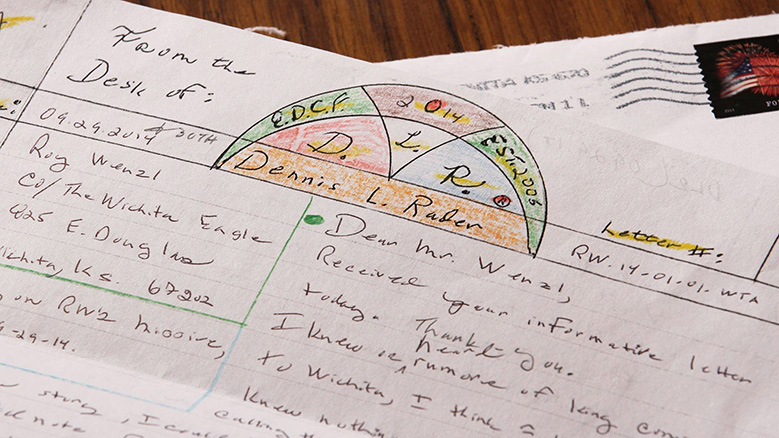 Watch: Naomi Ekperigin talks about the life of serial killer Dennis Rader, aka the BTK Killer, and how the police eventually caught him.

In 1974, he had placed a letter in a library book in which he took responsibility for killing a Wichita, Kansas family, the Oteros. The two-page missive detailed every miserable step of the murders. “When this monster enter [sic] my brain, I will never know,” he wrote. “But, it [sic] here to stay.” Rader killed again in the late 1970s and mid 1980s, and again in 1991. In 2004, on the anniversary of the Otero killing, he sent letters to local media outlets. They contained pictures of one of the victims, a word puzzle and an outline for BTK’s memoirs. That year and the following one, Rader exchanged messages with police. After he asked them if it would be secure to communicate via floppy disk, they said yes. Investigators discovered that the document had last been saved by a “Dennis” and used at the local Lutheran church. He had taken the disk to church to print out a document, which left a digital trail allowing police to track him down.