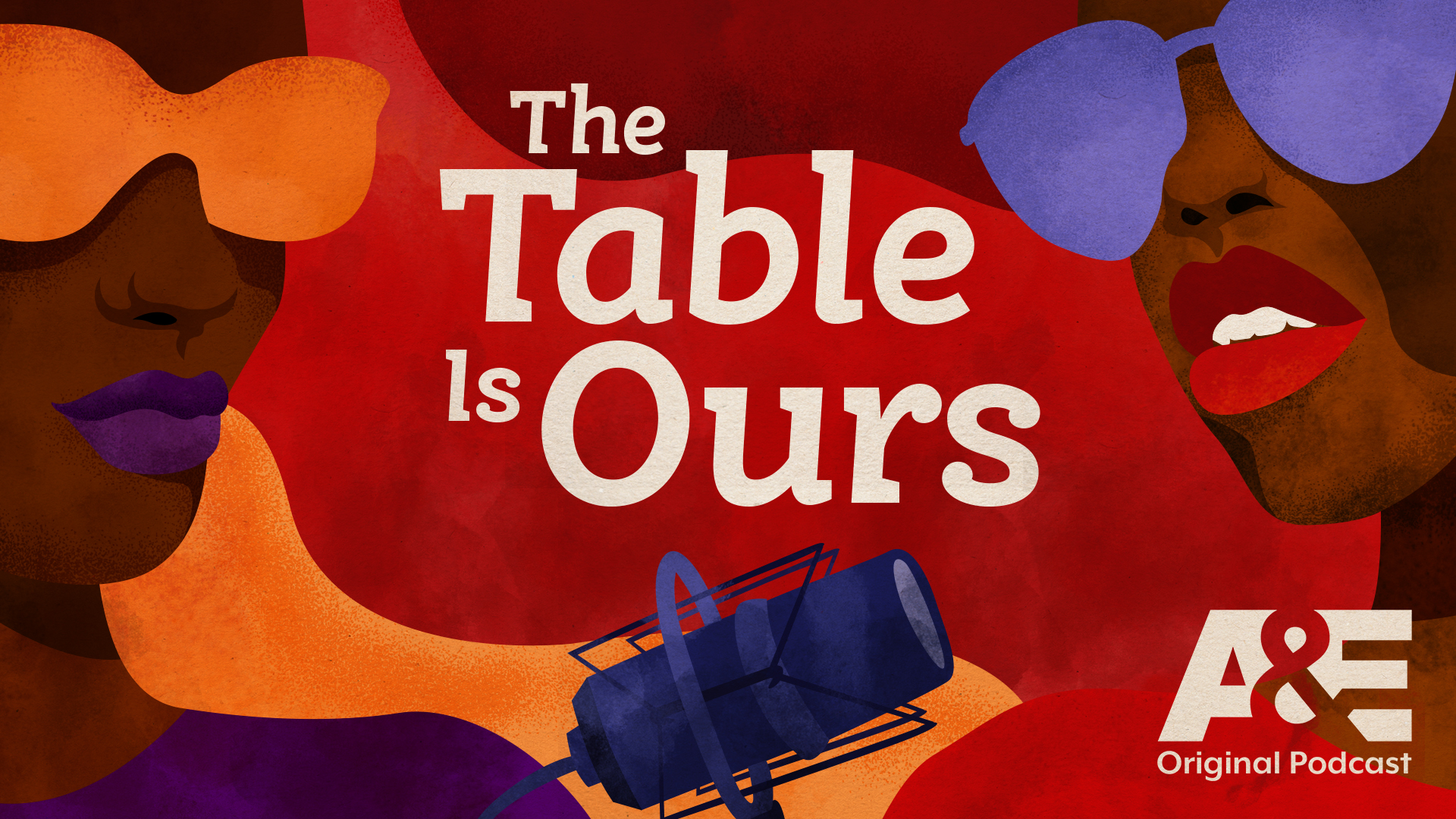 The Table is Ours

Black people in every industry—entertainment, sports, politics, culture—have worked hard to forge new paths and make change, and we want to talk about it. On The Table is Ours, hosts Kirby Dixon and Amira Lewally are doing exactly that. Instead of asking for a seat at the table, we are building our own. Through open, honest and deep conversations we'll learn how Black identity has informed, empowered and fortified the lives and careers of our Black faves. Listen up, because we are only getting louder.

Questlove: Finding Your Rhythm and the Power of Music

Music royalty Questlove pulled up a seat this week, and we're still ruminating on all the gems he dropped! We chatted about growing up in Philly, co-founding the Roots and how he finds balance between conscious music and commercial success. Plus, we talked about his epic directorial debut, Summer of Soul. From Sundance Film Festival awards to multiple Grammys, it seems like everything Questlove touches turns to platinum. Hus, that's short for hustlers!

Michelle Williams: Checking In and Knowing When to Ask for Help

Destiny was fulfilled this week because we have none other than the Michelle Williams joining us. If you don't know Michelle Williams... shame on you. Not only is she one third of the most iconic girl group of all time, Destiny's Child, but she's also a mental health and self-care advocate. We discussed her two-decade sisterhood with Beyoncé and Kelly, her personal journey dealing with depression and anxiety, breaking down mental health stigmas in the Black community and how she stayed true to her spirituality in an industry that sells sex appeal. Say her name, say her name because Michelle Williams came to slay. Can you keep up?

Quinta Brunson: Loving Your Roots and Branching Out

Philly native and the meme queen herself, Quinta Brunson, stops by the table this week for a fun and real conversation. We've watched Quinta evolve from viral meme to executive producer and star of her own show, Abbott Elementary. We discuss her Philly roots, transitioning from the digital world to traditional television, dealing with personal loss in a public forum and her new book She Memes Well. One thing is clear, no grass is growing under this queen's feet. Oh, SHE got money!

The radiant Susan Kelechi Watson stopped by this week, and her gifts simply cannot be ignored. The multi-talented Howard University and NYU alum shines on screens big and small and is even known to bust a move or spit a bar. We talked spirituality, the challenges that Black women face breaking into the entertainment industry and what it's like to play everyone's favorite Black mama on This Is Us. There’s a lot in this episode, and we unpack it all! Mic check 1, 2, 1, 2... Susan Kelechi Watson is coming in hot!

Uzo Aduba: Seeing Yourself and Being Seen

Three time Emmy award-winning actress Uzo Aduba blesses us with her presence on this week's episode, and her energy and light are infectious! From portraying the legendary Suzanne "Crazy Eyes" Warren in Orange is the New Black to the iconic Shirley Chisholm in Mrs. America to her leading role as Dr. Brooke Taylor in new series In Treatment, we can always count on Uzo to deliver! We talked about being first generation and learning to be proud of her African roots, working through grief and the time she almost quit acting for good. The only thing stronger than Uzo's chops is our standom!

Naomi Ekperigin: Standing Up & Standing Out

Joining us this week is comedian Naomi Ekperigin, and the girl power energy was strong from the start! Aside from being a stand-up comedian, podcast co-host of Couples Therapy and I Love A Lifetime Movie and writer for some of our favorite television shows such as Broad City, Great News and Search Party, sis does it ALL! We dive into standing out and having a unique voice in white spaces, the double standard of interracial relationships, finding your audience in comedy, and so much more. It's the #BlackGirlMagic for me!

Shaun Robinson is usually the queen of asking the questions. But The Table Is Ours, so we turned it! She stopped by for a chat about her climb up the local news ranks, the scoop on 90 Day Fiancé and her latest role as an executive producer for the Seven Deadly Sins movie anthology on Lifetime. We covered self-reflection during the pandemic, blatant discrepancies in media, and even took a dip into her DMs for the tea. Pull up a seat, y'all. It's Shaun's turn to tell all!

Everyone's favorite TV auntie and the original hot girl, Jackée Harry, joins us on this week's episode and spills the tea! She's been acting since 1984 and has been booked and busy ever since! Whether it's 227, Sister, Sister, or her recent 'scandalous' debut on Days of Our Lives, we're here for Jackée! We discuss career longevity, being typecast, her lesson from Maya Angelou, embracing social media and so much more! Get ready because we're acting up with this one! Hot Girl Spring activated.

Rico Nasty: "Female Rappers" and Being Yourself, Period

Pulling up a chair this week is rapper Rico Nasty! We aren't lying when we say Rico Nasty is truly one of a kind. The punk rapper princess defies any label you throw at her and makes her voice known in any room she enters. She lets us in on how she got her start, the growing pains of being in the music industry, and her refusal to compromise her individuality. She gave us an honest, real look into becoming mainstream, personal expression and of course... her Rihanna stan-dom. Who wants to fit in, when Rico Nasty shows us that we were ALL born to stand out!

Taye Diggs: Pursuing Your Passions and Being Black Famous

The legendary Taye Diggs joins us this week and leaves nothing off the table. Not only is he one of our faves, but your mom, auntie and grandmother probably love him too. From How Stella Got Her Groove Back to The Best Man, Brown Sugar, The Wood and beyond, Taye has been a staple of all of our favorite Black films and television shows. We dig into his love of acting and Broadway, getting paid what you’re worth, what fans can expect from the new The Best Man franchise and so much more. Get your two-step ready because Mr. Black Rom-Com is bringing the sunny days!

Houston native and one of our favorite heartthrobs, Kendrick Sampson, is coming through this week and getting real. Kendrick stands out in any role, whether it's Insecure, How To Get Away With Murder or Fashionably Yours. But in addition to acting, he is an activist and change maker who is not afraid to stand up for what he believes. Kendrick opened up to us about finding his voice, bringing activism into his art and his recent encounter with the Colombian police. Using our voice and speaking up is one of our greatest forms of activism, so let's get loud!

Lil Rel: The Power of Girl Dads and Rom-Coms

Comedian, actor, writer and producer Lil Rel Howery has been in the entertainment game for a minute, but it was his role as everyone's favorite TSA agent in Get Out that launched him into stardom. From The Photograph to Insecure to his new Netflix film Bad Trip, it seems like there's no genre Lil Rel can't conquer! This week, we chat with him about his love of romantic comedies, handling grief, and his relationship with the celebrity mom we all know and love, Mrs. Tina Knowles-Lawson! Don’t worry, y'all, this is a safe space not the sunken place!

Jay Pharoah is a man of many talents and impressions! He first hit our radar during his time on Saturday Night Live, and he's kept us laughing ever since. Whether it's stand-up comedy, movies or TV, Jay's star continues to shine. He sat down with us for a hilarious and personal conversation about his time on SNL, how an encounter with the police last spring changed his comedy for the better, and how advocating for others and speaking up is necessary for any kind of progress. Who needs a laugh track when you've got Jay Pharoah?

Danielle Brooks is a renaissance woman and one of our absolute favorite entertainers! Whether it's her incredible performance as Taystee in Orange Is The New Black or her dynamite portrayal of Sofia in The Color Purple on Broadway, Danielle is making her presence felt as a leading lady. We sat down with her for an intimate discussion about her life since becoming a mother, how she'll choose roles moving forward and what it took to portray the legendary Mahalia Jackson. Don't forget your shades because the Black Girl Magic is shining bright this week!

Our fave digital mentor and fashionista, Elaine Welteroth, has done it all. She's a journalist, magazine editor, TV personality and a New York Times best-selling author. At 29, she made history when she was appointed as the youngest editor-in-chief of Teen Vogue. We talked with our new auntie-in-chief about finding your path, breaking into the boardroom and overcoming imposter syndrome. No more shrinking in the workplace, we're expanding loudly and proudly after this interview!

When we think of our childhood Black TV faves, Kyla Pratt undoubtedly comes to mind. She's sitcom royalty, starring in One on One, and appearing on shows like Moesha, Sister Sister, The Parkers and Lizzie McGuire just to name a few. She's also the voice of some of our favorite animated characters – hello, Penny Proud! We sat down with Kyla to discuss her journey from childhood stardom to being Black and pregnant in Hollywood and the importance of protecting your peace. We're getting cute and loud with this one!

A reality TV icon, Karamo Brown first appeared on The Real World: Philadelphia, where he broke down barriers as the first Black, openly gay man in Real World history. Now, he is the resident life coach and culture king on Queer Eye. As if that isn't enough, in the decade between TV ventures, Karamo also became a licensed psychotherapist and social worker. He went deep with us, exploring everything from Black masculinity and fatherhood to mental health and personal growth in the public eye. We even discussed bringing Negro Spirituals back in 2021. Let the church say AMEN!

The epitome of Black Girl Magic, multi-talented queen Vanessa Williams stole the spotlight after being crowned the first Black Miss America in 1983. Since then, she has conquered everything from music, to TV, film, stage and beyond. She sat down with us to talk about the pressures that come with being a first, the importance of self-love, nurturing many talents, and how she's giving back to the Black theatre community with her newest passion – Black Theatre United.

Big Freedia: Duality and the Power of Shaking Ass

Headlines started calling Big Freedia an "overnight sensation" when she was featured on Beyoncés "Formation" and Drake's "Nice For What," but she's been in the Bounce music game for over 20 years. We talk to Big Freedia about living a dual life on and off stage, her love for New Orleans, coping with grief and of course, performing with the Queen Bey in her home town, plus so much more. Check out her book, Big Freedia: God Save the Queen Diva. Girl down!

Introducing: The Table is Ours

Listen to a preview of the upcoming A&E Original Podcast, The Table is Ours.

Apple Spotify Stitcher
The Apple logo, iPhone, iPod touch, and iTunes are trademarks of Apple Inc., registered in the U.S. and other countries..
By submitting your information, you agree to receive emails from A&E and A+E Networks. You can opt out at any time. You must be 16 years or older and a resident of the United States. More details: